DDAU, Data Owners and Who Should Mutate Data

Last reviewed in November 2016 with Ember 2.9 Update to Ember Octane in progress!

We call data owner to that application component that takes responsibility for manipulating, loading or persisting a particular piece of data.

A component will typically receive an argument with data to render (data down) from the data owner. Since the goal of DDAU is that only data owners mutate their own data, other components need to be able to communicate back to the data owner to indicate changes (actions up).

That's right, we don't want to rely on two-way bindings for mutating state. Instead, we want to invoke functions that convey the mutation.

Closure actions are functions wrapped in a function. When the action helper is called it creates a function with a closure that captures the scope and arguments. We are now free to pass these functions around and invoke them in their original context.

Given a component named parent:

here is how it would include a reading-list component:

Whenever a book is added, the reading-list component will invoke its addBook attribute: the add closure action. This is how the component is able to tell the data owner (parent component) that books should be updated to reflect a new book added to the array.

Notice how elegantly each component deals with its own responsibilities.

In the Ember stone age, we were using this.sendAction() with named actions which would be invoked in “element space”. A sendAction would trigger an event that bubbled up the chain until it found an action with that name. Intermediate components in the hierarchy had to pass that name around.

This approach had quite some drawbacks:

So (action) will look for actions in:

But what if the route is the data owner?

Actions up to the route

The getting started guide also featured a reading-list component.

There, the application route is the data owner: it loaded and persisted books from/to a database.

Let's quickly recall how that looked: 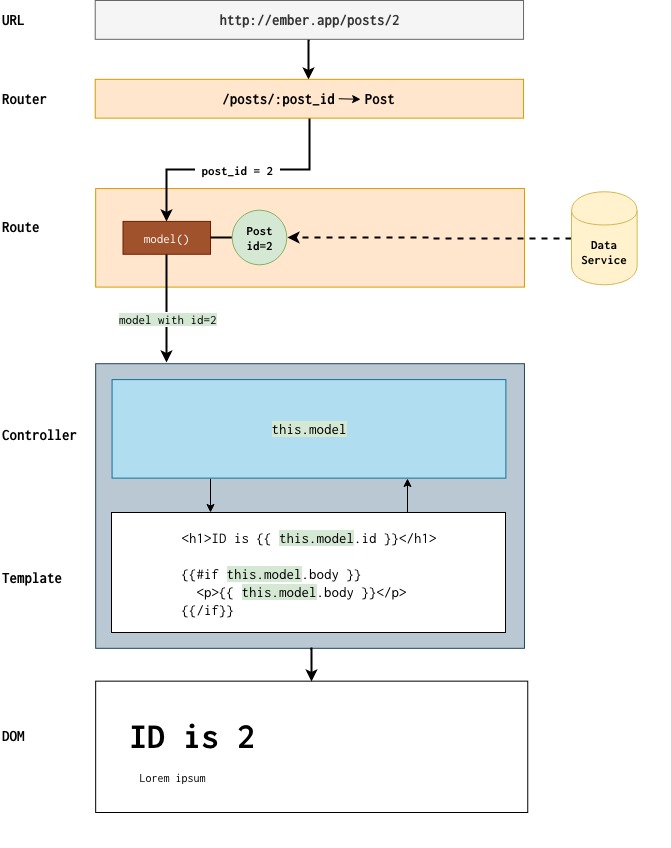 At the bottom of the diagram, notice how we pass in an onEnter action (belongs to the reading-list component) to the input component.

When the enter key is pressed, onEnter gets the input title and creates a book object. How does it send that book object up to the data owner (the route)?

Simple enough, sendAction can bubble up to the route, right?

That is correct. But we are back to old ugly sendAction. Luckily we have a much better option that does not require intermediate components/controllers to “catch-and-throw” action logic.

It is a fantastic add-on called ember-route-action-helper.

If you paid attention in the diagram above, this is how we are passing in the route action:

And we can refactor our component to use that function:

Remember that closure actions return values – that is invaluable.

If the route returned a promise (which is very common), we can catch errors and render appropriately:

Updating a component property after some user interaction is indeed very common. Ember has us covered: a mut helper that will act as a “setter” – significantly DRY'ing up our code.

We use it as a subexpression with the action helper:

Which is equivalent to:

PLUS the corresponding action:

So, which one do you prefer?

More complex components such as a date-picker may deal with objects instead of strings. With value we can essentially “pluck” a property of the returned object.

In this date picker, we want to get the moment.js value of the date. Instead of retrieving date.moment in an action, we do everything in the template:

Do you use any of these tools? Which one you prefer and why? Let me know in the comments below!